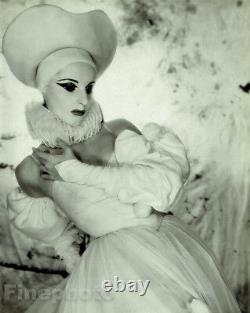 Whether you collect vintage photogravure prints or are simply looking for extraordinary home or business decor, this authentic vintage photogravure plate will frame and display beautifully! This photogravure plate is guaranteed to be authentic and comes with a hand signed CERTIFICATE OF AUTHENTICITY (COA) with unique individual registered serial number from the Finephoto Vintage Archive & Database. Under magnification this plate shows a tight "honeycomb" cell structure, uniform pressing of ink and a wide range of tone - all indicative of a high quality sheet fed gravure print.

The watermark word "Finephoto" does not appear on the actual print. Please Note: there is gravure printing on the reverse side of this vintage plate from the original dual sided issue. About George Platt Lynes (from Wiki): George Platt Lynes was an American fashion, commercial and fine art photographer. Born in East Orange, New Jersey in 1907, he spent his childhood in New Jersey but attended the Berkshire School in Massachusetts.

He was sent to Paris in 1925 with the idea of better preparing him for college. His life was forever changed by the circle of friends that he would meet there. Gertrude Stein, Glenway Wescott, Monroe Wheeler and those that he met through them opened an entirely new world to the young artist. He first became interested in photography not with the idea of a career, but to take photographs of his friends and display them in his bookstore.

Returning to France the next year, he traveled around Europe for the next several years, always with his camera at hand. He developed close friendships within a larger circle of artists including Jean Cocteau and Julien Levy, the art dealer and critic. Levy would exhibit his photographs in his gallery in New York City in 1932 and Lynes would open his studio there that same year. He was soon receiving commissions from Harper's Bazaar, Town & Country, and Vogue including a cover with perhaps the first supermodel, Lisa Fonssagrives. In 1935 he was asked to document the principal dancers and productions of Lincoln Kirstein's and George Balanchine's newly founded American Ballet company (now the New York City Ballet). While he continued to shoot fashion photographs during the 1930s and 1940s, he was losing interest and had started a series of photographs which interpreted characters and stories from Greek mythology. By 1946, he grew disillusioned with New York and left for Hollywood, where he became chief photographer for the Vogue studios. He photographed Katharine Hepburn, Rosalind Russell, Gloria Swanson and Orson Welles, from the film industry, as well as others in the arts among them Aldous Huxley, Igor Stravinsky, and Thomas Mann. While this work was a success artistically, it was a financial failure.

His friends helped him to move back to New York City in 1948. Other photographers, such as Richard Avedon, Edgar de Evia and Irving Penn, had taken his place in the fashion world. This combined with his disinterest in commercial work, meant he was never able to regain the successes he once had. During his lifetime, Lynes amassed a substantial body of work involving nude and homoerotic photography.

Unauthorized copying or use of ANY PART of this description is prohibited. The item "1950 NEW YORK CITY BALLET LES ILLUMINATIONS LeCLERCQ Photo GEORGE PLATT LYNES" is in sale since Thursday, February 16, 2017.

This item is in the category "Art\Art Photographs". The seller is "finephoto" and is located in Tampa, Florida.

This item can be shipped worldwide.