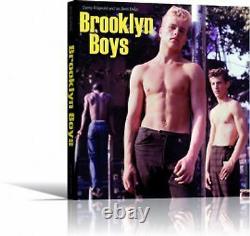 Triple Signed, December 12th, 2013 book signing at the Steven Kasher Gallery, Opening Reception. Hand signed by Richard Bennett , model, muse and les demi dieux partner + Mssrs. Robert Loncar + and James Kempster , curators and editors. The images of Les Demi Dieux are remarkable for being a precursor of later "artistic nudes" but still having a distinct look. Unlike most such work, the darkroom skills of Les Demi Dieux are very strong, & there is more attention to overall composition. Les Demi Dieux worked with well-known physique models such as Richard Bennett, as well as alot of local Brooklyn boys with greaser haircuts. As a point of curiosity, the few images which are signed, are signed by the models rather than the elusive Les Demi Dieux. & he had no blindstamp either, as far as I can tell. The most remarkable images are of shirtless or nearly shirtless boys on the streets of Brooklyn - the Brooklyn in these photos is an empty city. Unlike classic physique images which catalogue gym work - measurements, body mass, in conventionalized poses, the Brooklyn boys look like dreamers in an abandoned city - there is a palpable romanticism. Male physique photography exists on a periphery of other histories. Figure studies date from the early period of photography, such as images by Eugene Durieu made for the painter Eugene Delacroix. Looking beyond the lurid advertisements of Muscle & Fitness, there existed in this realm of men looking at men, a cottage industry of images circulated after WWII, through the 1970s, which although seemingly simply extolling the All-American Boy, were meant for a specifically gay audience, or to use a term Gore Vidal coined, "homosexualist". This was a pre-Stonewall gay audience. For example, Bob Mizer, AMG photographer & publisher of Physique Pictorial which was produced in his mother's house in Los Angeles, would bring an array of his pets including a monkey & a goat into images, he would clothe the models as motorcyclists, prisoners, mechanics, sailors, Indians - his imagination was quite fertile & those who would be looking for "those types" of images would see "it" loud and clear. & I would point out a brilliant bit of DIY set-building of Mizer's: projecting lights through his mother's cut glass bowls to create artistic backdrops for his models. There were physique studios across the US: The Athletic Model Guild (Bob Mizer), Bruce Bellas first an itenerant photographer of the naked heartland then later Kensington Road of Los Angeles, Lon of New York, Douglas of Detroit, David of Cleveland. Some models became entrepreneurs of their images as well, such as Bob Delmonteque. Fitzgerald operated studio Les Demi Dieux from his home in Carroll Gardens, Brooklyn NYC with his partner, muse and model Richard Bennett + local friends Robert Ruy, Nestor Derkach, Orest Daszo, Jerry Albanese, Vince Perri et al. He considered his models demi-gods: sublime, muscled beauties on the streets of Brooklyn, beaches of New Jersey, the woods of Pennsylvania. Les Demi-Dieux has long been considered one of the most artistic and certainly the most mysterious of the classic physique photographers. Only recently identified as Danny Fitzgerald, there is still very little known about his life. In the flesh, the Brooklyn boys were members of street gangs: greasers smoldering with bravado and swagger.

They play cards, smoke cigarettes, and slouch against their Buick or Chevy. Occasionally photographed in his studio; elegant, sensual nudes. The Brooklyn boys exist on a cusp between innocence and street savvy, boyhood and manhood, mortality and eternity. In a style redolent with both classicism and realism, Fitzgeralds gritty yet gorgeous nudes surpass the clichés of standard beefcake photography. Fitzgerald began photographing the young men he met at Abe Goldbergs gym in the Lower East Side neighborhood of Manhattan - working-class guys 20 years his junior.

Etude academique, en plein air male nudes in nature, both black and white and color. Fitzgerald portraits appeared regularly in pre-Stonewall publications as Young Physique, Muscles a Go-Go, Demi Gods and Era. His work dropped out of view until re discovered by Loncar/Kempster 9783867876322. In 1990 they became a foundation dedicated to preserving art which many in the art world used to destroy.

Ed Cervone's "Three Sailor's". Or perhaps Patrick Angus' Hanky Panky - set in an adult movie house. Darold Perkins has taken an Arrow Shirt ad and turned it into an ad instead. Next in the Drawings and Prints category we particularly love Paul Cadmus; the explicit Andy Warhol drawings -- he wasn't Tom of Finland....

But much more than Campbell's Tomato Soup We offer modern firsts, original photography, the arts, and gay erotica. You will also find a fine selection of signed copies, limited editions, and memorabilia because the goal is to deepen the pleasure of collecting. We carry those that we ourselves like and believe in -- that we think will excite, enchant, and endure. The item "SIGNED Richard Bennett Brooklyn Boys RARE vtg NY les Demi Dieux beefcake gay art" is in sale since Thursday, February 25, 2021. This item is in the category "Books & Magazines\Books".

The seller is "wabi_sabii" and is located in Pensacola, Florida. This item can be shipped worldwide.